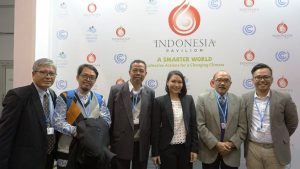 In the opening speech of the “Combating Marine Plastic Debris” discussion at Indonesia Pavilion COP 23, Coordinating Ministry of Maritime Division, Luhut B. Pandjaitan stated that plastic waste and microplastics are the current biggest threats to marine biodiversity. Plastic waste has become a national, regional, and global issue which if left ignored can cause more major pollutants that can be a threat to human health because humans consume the fish that eat the plastic waste. Therefore, Indonesia has made a commitment to reduce 70% of its marine plastic waste by 2025.

Gerakan Indonesia Diet Kantong Plastik (GIDKP) (Indonesia Plastic Bag Diet Movement) held a discussion named “People Power in Plastic Diet Movement” at Indonesia Pavilion COP 23, Germany on 16 November 2017 local time. In this discussion, GIDKP talked about how the grassroots movement of the community pushed the government to impose a non-free plastic bag trial in 2016, which resulted in a 55% reduction of plastic bag consumption.

The discussion also addressed the independent role of local governments in independently drafting a plastic bag ban regulation to reduce plastic waste in cities. Attending as speakers were R. Sudirman, Director of Waste of the Ministry of Environment and Forestry, Tiza Mafira as Executive Director of GIDKP, Rahyang Nusantara as National Coordinator of GIDKP and Coordinator of Sustainable Development Solutions Network (SDSN) Youth Indonesia, as well as Hamdi bin Amak Hasan as Government Assistant II Economics and Development Division of the City of Banjarmasin – Banjarmasin being the first city in Indonesia to band plastic bags in modern retails. Also attending was Dr. Ir. Efransyah, Senior Advisor to the Minister of Environment of Forestry, who was the moderator in this session. 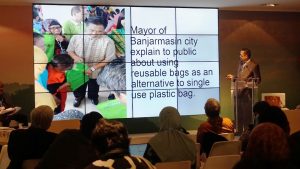 “The city of Banjarmasin took advantage of the non-free plastic bag trial socialization in 2016 as a momentum to issue a regulation that bans plastic bags in modern retails. Thank God, one year has passed and everything has been going smoothly. There have been no significant difficulties. I hope that other local governments and the central government can follow Banjarmasin and show Indonesia’s determination in resolving the plastic waste issue to the world”, says Mr. Hamdi on the plastic bag ban in Banjarmasin.

Tiza Mafira adds that GIDKP has done a survey which shows that most people are ready for non-free plastic bags, and that even retailers responded supportively. “The experience of Banjarmasin shows that the local government is already one step ahead and has succeeded in banning plastic bags. The plastic bag reduction is also measurable, and can contribute directly to Indonesia’s target of reducing marine plastic waste by 70%. What else are we waiting for?”, says Tiza. 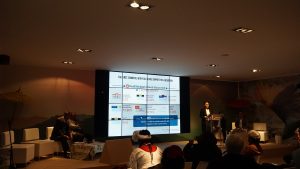 The pressure to immediately issue a government regulation on plastic bag usage reduction is also supported by Yayasan Lembaga Konsumen Indonesia (YLKI) as a representative of Indonesian consumers.

“Plastic consumption must be regulated downstream, by carrying out sustainable consumption behavior. This effort can be achieved if consumers are given disincentives when they use plastic. The more wasteful they are, the bigger the disincentive. Producers must recall the waste from their products, especially those made of plastic, so that plastic waste will not be scattered everywhere and cause environmental damage”, says Tulus Abadi, Head of Daily Board of Yayasan Lembaga Konsumen Indonesia.

Industries that produce alternatives to conventional plastic bags also talked about the plastic reduction issue in Indonesia. “As long as kresek plastic bags keep being given out freely and are not regulated, it will be difficult for technologically innovative products, such as organic bags from cassava flour and bags from seaweed, to enter the commercial market and be accepted by the wider community. Concrete support can be given by the government by issuing a regulation about alternatives to kresek plastic bags, specifically by regulating usage and banning free plastic bags”, says Sri Megawati, Marketing Communication of Enviplast, a brand of organic bags made from cassava flour.

GIDKP’s discussion session at Indonesia Pavilion COP 23 Bonn, Germany is supported by The Body Shop Indonesia and United in Diversity, which is also the secretariat of SDSN Southeast Asia. During this opportunity, GIDKP also displayed a campaign video that raised the initiative of the city of Banjarmasin’s local government and the policy of PT. Lion Superindo, which are still consistent in supporting the effort of banning or putting a fee on plastic bag usage. This video also shows a call for the government, especially the Ministry of Environment and Forestry to create #NoMoreDelay in issuing a regulation on plastic bag usage as a concrete step in achieving the government’s target of reducing marine plastic waste. 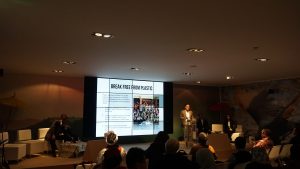 “Plastic pollution reduction must be achieved by “walking the talk”, which entails exercising what has been a mutual commitment to reducing plastic pollution, both on land and at sea. Every party must also “talk the walk”, by spreading positive stories in the hopes of them becoming an inspiration for the wider public”, says Rahyang Nusantara, National Coordinator of GIDKP.